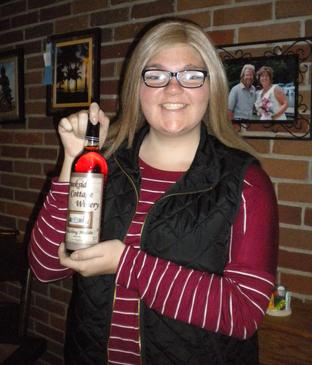 Creekside Cottage Winery is a family oriented business.  From the beginning we have included our family in this adventure which created Creekside Cottage Winery.  When we were deciding on names for our wines we included the names of our children along with our nautical theme.  Blushing Maddie, our white zinfandel, is a blush wine named after our niece Madeline “Maddie” Bland.  In the fall of 2014, as she began her senior year of high school, Maddie was diagnosed with Ewing’s Sarcoma.  From October 2014-October 2015 Maddie went through chemotherapy, radiation therapy and multiple surgeries at Akron Children’s Hospital.  During her yearlong battle with cancer Maddie’s positive attitude, unyielding faith and tremendous strength made her an inspiration to all of us.  Since she has been in recovery Maddie’s giving nature has led her to becoming a Hospice volunteer.  She also wanted to do something to aid in the research at Akron Children’s Hospital Cancer Research Program.  When Maddie asked us if she could somehow use “MY WINE” to benefit Akron Children’s Hospital, we immediately said YES.  Creekside Cottage Winery has made arrangements with Akron Children’s Hospital to donate $1 from every bottle of Blushing Maddie sold to the Adolescent/Young Adult Cancer Research Program at Akron Children’s Hospital.  We will also be sponsoring “Maddie” events at the winery with the proceeds to benefit the ongoing research.  Please join us in supporting Maddie’s efforts to provide funds for this important research program.